Today’s blog is on a topic very important to me and my practice. It’s a topic I am passionate about. Clinical depression affects more than 6 million men in the U.S. Our beloved state of Colorado has a very high rate of suicide among men as compared to the rest of the country. Clinical depression for women and men is marked by sadness and a loss of interest in once pleasurable activities. But depression can present differently in different people, particularly with men.

Here are 10 signs of depression in men.

Many men that I see in my practice either complain of feeling irritable all the time or that their partner or close friend is always telling them they are irritable and easily annoyed. This irritability is usually associated with continued negative thoughts.

Too much or too little sleep

Sleep problems such as insomnia, waking up very early in the morning, or excessive sleeping are common depression symptoms. Sometimes men who struggle with depression have difficulty falling asleep or staying asleep. This often results in fatigue.

In addition, many of the men I see in my practice are experiencing both chronic pain and depression. Back pain or stomach ache, constipation or diarrhea, as well as headaches and back pain, are common in people who are depressed. It is important to visit your primary care doctor to rule out any other causes of back pain or stomachache.

A typical complaint I hear in my therapy practice from depressed men is difficulty focusing or concentrating. Psychomotor delay can slow down a man’s ability to process information, thereby impairing concentration on work or other tasks. A depressed man might be preoccupied with negative thoughts, thereby making it difficult to concentrate on important tasks.

Many depressed men become angry or hostile. In my practice I often hear men state how they are concerned with how angry they get. They will tell me, “These days I get really angry, like I want to hurt someone. But that’s not like me. I am a peaceful guy.”

Sometimes depressed man isolate themselves because they are concerned that their out of control anger will result in someone getting hurt.

As a society we have seen an increase in stress related illnesses. Chronic stress can lead to depression. On the other hand depression can depleted a man’s ability to effectively cope with everyday stress.

What was once a manageable level of stress can become overwhelming for the depressed male.

Research demonstrates a strong link between depression and anxiety. Anxiety can come in many forms including social anxiety, panic attacks, overwhelming fear and avoidance.

A therapist and mentor of mine once described substance abuse as a misery stabilizer. In otherwords, substance abuse keeps you miserable. However, most depressed men who abuse substances do so in an attempt to cope with symptoms associated with depression. Alcohol is a depressant, very often depressed men use alcohol to cope, which can cause the depression to get worse.

Depressed men often isolate themselves from family and friends. Not only does this mean physically not being around others, it can also mean being preoccupied with using a smart phone or computer. In the case of smart phones, some men can be physically present in a social situation, but in fact also be isolating themselves by using the device.

As stated earlier, suicide in Colorado is higher than the national average. While men attempt suicide at a lower rate compared to women, they are more likely to die from the attempt. This is because men often chose a more deadly way to kill themselves.

If you or someone you love is experiencing depression, the good news is that there is help. Psychotherapy is a scientifically proven way to treat depression. There are no side effects to psychotherapy. Often times men do not treat their depression due to the stigma of mental illness.

However, this is changing. Here in Colorado we have an excellent campaign to address male depression and male mental illness. Its called Man Therapy. It addresses a serious issue in a hilarious way. Imagine Ron Burgundy talking about depression! 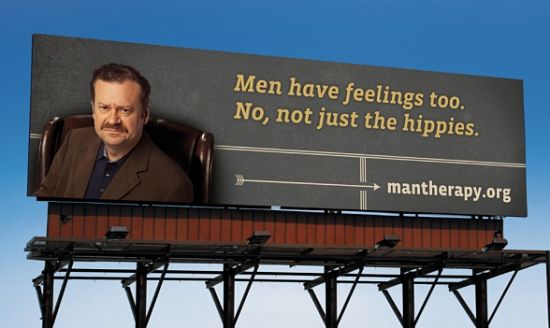 Do You Need Therapy? Take the Quiz.