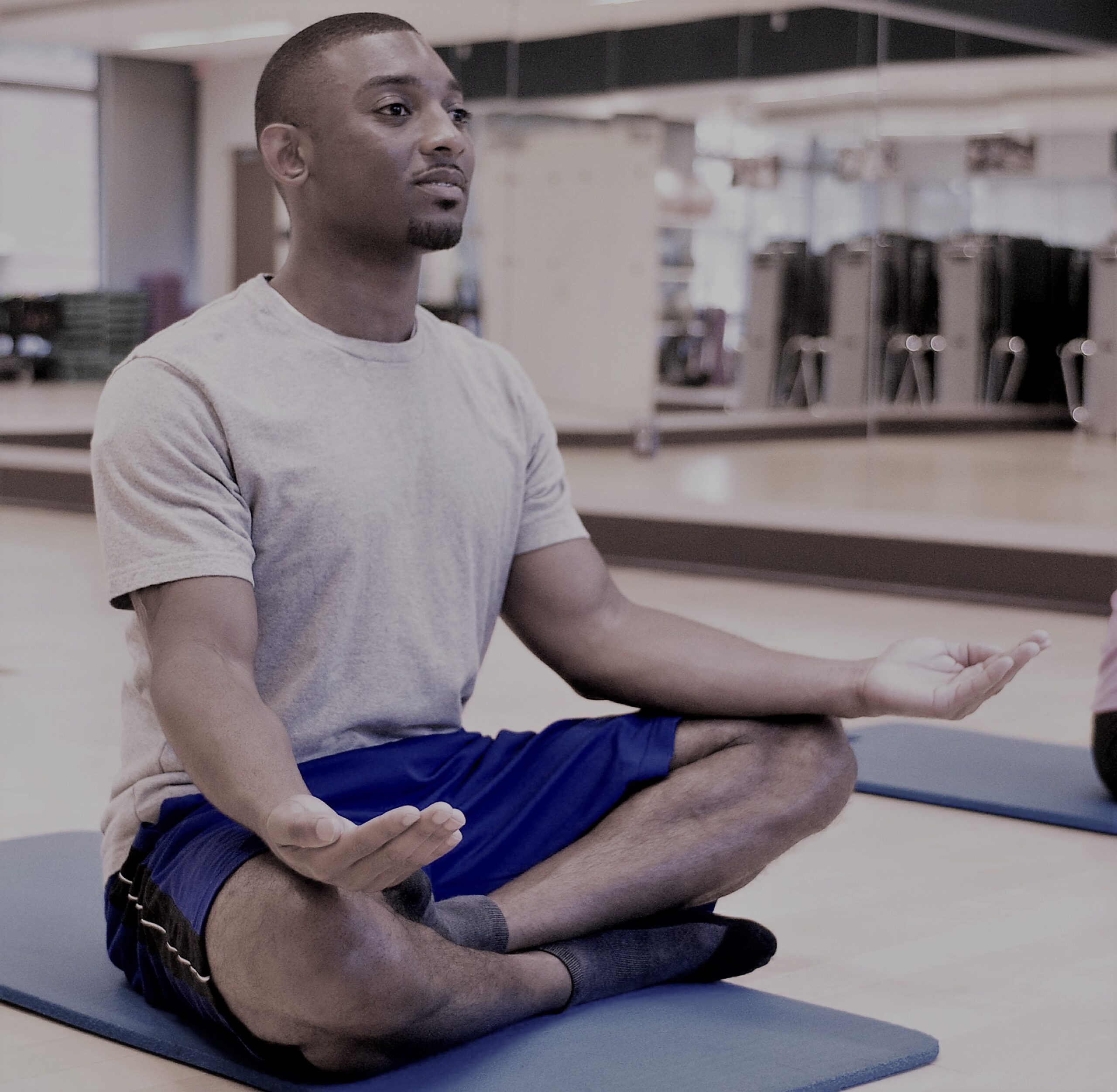 Traditional Indian yogis are primarily men. Yet, in Western culture it still remains a “women’s thing.” Men are usually so strongly convinced that yoga belongs to the realms of femininity that they rarely even think about practicing it, let alone try it. Yoga for men? “Ha” some think.

And if us men do think about such an endeavor, we mostly get discouraged by emotional, physical, and societal hurdles. It’s worth pushing past these and overcoming the fear though because yoga comes with a wide array of benefits, some universal, and some specific to men.

Why We Discard Yoga in the First Place

When yoga was introduced to America, many times (and even today), women headed the movement. Classes were attended by smoothly moving delicate and flexible women who exercised in groups in a slightly feminine studio, guided by a female instructor with a soothing voice. Intimidating? Well, yeah!

And, both men and women seem to perpetuate this myth that yoga isn’t for guys. Nowadays, when a man gets interested in the practice, he typically gets discouraged at the very entrance to a yoga class, since, in all probability, he is the only male there. Fight the labeling, the teasing, or the just plain awkwardness of having to justify his interest in yoga is oftentimes too demanding for men to even get involved in such an enterprise. Even if he does endure in his intention, this brave man will face betraying reminders of the differences in male and female physique. When a man recollects his first yoga classes, it is inevitable to remember the pain, the absolute lack of flexibility compared to his female companions, and the inevitability of groaning and moaning while trying to get even close to the positions the instructor was demonstrating with such grace.

The reasons are simple. Although both girls and boys come to the world equally bendable, the elasticity is much quicker to disappear among males. We do get more muscle mass and greater strength, but for some reason our tendons and ligaments cannot be compared to those of women.

Yoga Can Bring Up Emotions

Practicing yoga can also be emotionally challenging. First of all, the social pressure to conform to the models put in front of us is far too great to be ignored. It is just in the recent years that men wanting to practice yoga meet more acceptance and less stigmatization. Nonetheless, the tension is still there. Furthermore, for men, physical activity is inseparable from competition. And yoga is in direct opposite to that. We need to learn to disengage our natural competitiveness in order for yoga to have its effect on our mind and our bodies.

Finally, and this is the aspect that often raises the biggest inner conflict with men who try to practice, yoga and related meditation often come with intense emotional experiences, ones that many men find difficult to experience, recognize, own to, and address. Men are taught to be tough, and to react in ways that tend to reduce the span of emotionality to anger (when it comes to negative emotions). Yoga can, at times, bring forth feelings an average man is not used to experiencing, and these might be hard for him to go through.

It’s easy to just turn away from yoga. Much easier than for a man to overcome all the barriers that stand between him and this Eastern practice of putting mind and body into an equilibrium. However, the benefits it produces are what’s bringing many athletes, business professionals, and men from all vocations and backgrounds to gradually embrace yoga.

Yoga for men is nothing but a gain. The mind and body benefits are not just reserved for meditative, quiet personalities either. Every type of man can benefit from the practice. Apart from apparent physical advantages of exercising, your psychological health and social relations will notice an uptick as well. Yoga increases flexibility and range of motion. It also elongates muscles and thereby aids in preventing injuries. Unexpectedly to some, it also builds lean muscle mass. Further, your digestive and cardiovascular systems will be working better if you commit a couple of hours a week to the practice. Oh, did I mention? Your sex drive will also increase.

Yoga can help you perform better at work, interact with your family more kindly, and have greater mental clarity and emotional stability for whatever you set your mind to.

Some of these transformations are direct and some happen over a period of time. You see, once you practice regularly, you’ll have greater emotional balance. After some consistent time feeling this enhanced emotional balance, the results can be remarkable. Yoga is associated with something we would describe as a clear and tranquil mind, a sort of a cognitive clarity, which helps us react free from the noise of our everyday tension.

There is a strong link between lower stress levels among men who practice yoga compared to those who don’t.

If you belong to the corporate world, the sharpness of thought that comes with yoga (and this is empirically validated claim) will help you joggle all those pressures that come with the profession. But regardless of what you do and who you are, yoga for men comes with invaluable advantages that you just cannot keep ignoring if you wish yourself well. So, pick an instructor and talk to your psychotherapist about how to overcome social and psychological barriers to practicing yoga, and start making the most of this precious tradition.

The Cost v. Benefit Analysis: Is Counseling Worth the Cost (and how much is it?)